IT Outsourcing to Latin America: A Must-Read Book by Nacho de Marco

Read an exclusive preview of Nacho De Marco’s ebook which dives into the world of software outsourcing to Latin America, its pros and cons and...

BairesDev is the leading nearshore technology solutions company with 4,000+ professionals in 50+ countries representing the top 1% of tech talent.

Read an exclusive preview of Nacho De Marco’s ebook which dives into the world of software outsourcing to Latin America, its pros and cons and overall advice on how to best handle an outsourcing partnership.

To read the complete version, download it for free here!

The Growth of IT Outsourcing to Latin America

The most commonly outsourced business processes that occur today are in the following industries:

Outsourcing processes in these industries has short-term and long-term advantages, such as starting projects faster and bringing them faster to market. Furthermore, outsourcing these services can serve as the starting point of a fruitful relationship between your company and an outsourcing firm that you can rely on when you need additional services to support your in-house teams.

Businesses are always striving for efficiency and reducing the costs of operations without sacrificing the quality of service. Finding ways to continually innovate and attract top talent are also important goals. This goal may seem difficult to achieve, but it is attainable. If you outsource outside of the United States, your company can keep a competitive edge while working at scale without increasing costs.

If you outsource outside of the United States, your company can keep a competitive edge.

Why Outsourcing Became Popular in the Last Decade

Outsourcing is far from a new idea, but the economic uncertainty that was prevalent in the mid-2000s pushed this concept to the forefront for many U.S. businesses. Companies began to discover inspiring new approaches to address the ongoing need for high-quality and affordable operations to stay afloat in their respective industries.

Outsourcing became a means to an end by providing businesses with flexible options. Specific tasks could be outsourced to IT teams without the overhead costs associated with new hires.

The popularity of outsourcing and the convenience of the Internet came with more options for professional outsourcing services. With fewer geographical boundaries, global talent became available.

To maintain a competitive edge, companies need the knowledge that only talent with a high level of expertise can provide. Through outsourcing, these specialized workers can be contracted at lower costs for labor. In-house teams also benefit from outsourcing because they aren’t required to take on additional tasks that often serve as a distraction from core business operations.

Cost-effectiveness is known to be the primary reason for outsourcing, but thought leaders aren’t outsourcing just to save money. Outsourcing is used to increase productivity and foster innovation. In fact, a study by IBM found that 36% of employers that use outsourcing are innovators while 37% are growth-seekers2. Companies that have effectively grown and optimized their brand through outsourcing include AppSumo, GitHub, and Alibaba. 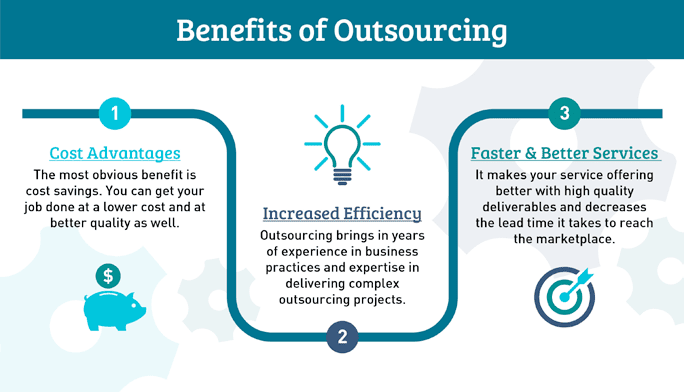 Advantages of Outsourcing to Latin America

Due to global accessibility, many businesses sought out China or India as their primary outsourcing destination; others saw Latin America as the ideal option for a variety of reasons.

Businesses decided to outsource to Latin America because the region offered many of the elements companies were looking for when outsourcing, such as highly talented workers and more innovative development methods.

The most popular Latin American countries offering IT services to offshore companies are:

“Outsourcing was the bogeyman of the ‘90s. Protectionists portrayed it as an evil that would take American jobs away. Yes, some jobs did go offshore as people feared, but it made the global economic pie grow bigger.” – Vivek Wadhwa

Cost-effectiveness is undoubtedly a primary motivator for outsourcing. Hiring competent workers in the United States, especially those in fields such as IT or software development, is likely to cost two or three times as much in comparison to someone with the same skill sets in Latin America.

For example, a developer based in the United States may work at an hourly rate of USD$150 while an equally qualified developer in Latin America may be available for work and will perform the same tasks at USD$75 hourly.

Reducing costs while becoming more efficient with outsourcing is a discussion we will continue in Chapter 3.

The modern business culture in Latin America is quite favorable for U.S. partnerships, but the U.S. isn’t the only country taking notice. Based on a study in 2017 from the A.T. Kearney Global Services Location Index5, Latin America is gaining popularity and becoming known as a home to a positive offshoring landscape due to financial attractiveness, people skills, and a great business environment. Latin America’s cost-effective options coupled with the sound business environment and talented population are likely the reasons why more businesses look to the region with outsourcing needs. The study listed the top countries for offshoring, and of the top 20 countries named, five were in Latin America. These include:

U.S. companies are now seeking out Latin American outsourcing firms because of the rising numbers of IT professionals in these promising economies.

Santiago is one of the thriving regions leading the way as a technological hub supporting innovations and entrepreneurial endeavors. Santiago ranks fifth in the listing of Top 10 cities with the best economies of the world, as shared in a study by the London School of Economics and The Brookings Institute. But the capital city has become more famous for being home to 500 Startups: Latam and Start-Up Chile, two companies that invest heavily in local startups, rather than the home of IT outsourcing hubs.

Cultural Similarities to the United States

Having lived in both areas, I’ve noticed that although there are a few cultural differences between Latin American countries and the United States, there are a substantial number of similarities that often outweigh these differences and can foster respectful and ongoing working relationships. Along with fewer communication barriers presented by language and time differences, both the United States and Latin America share a similar work ethic and appreciative creative solutions when conducting business. Here are other similarities.

Effective communication is a priority, so facing scheduling conflicts can be stressful when building a global relationship with an outsourcing service provider. Consider the potential setbacks. How will reasonable schedules be set? Will you be arranging calls in the middle of the night to discuss urgent issues with developers and IT personnel because of time differences?

Case in point, there is a 12.5 hour time difference between San Francisco and India. Outsourcing to Latin America provides less of a gap in the time of working hours and offers a significant reduction in travel time. There are direct flights between some of the biggest cities in the U.S. and Latin America.

If, for example, you are working with an outsourced team in Argentina, and your in-house team is in the United States, you will be able to work alongside contract workers in Argentina in real-time because of the similar time zones.

The time-zone proximity is so close that there might only be a two or three-hour difference (depending on daylight saving time). This nearshore advantage is crucial for establishing a productive flow with IT personnel and moving with enhanced speed throughout development and testing phases. One of the main cultural similarities is language. Many people in Latin America speak English as a second language. In fact, The Education First (EF) English Proficiency6 noted the proclivity for English-speaking in Latin America in 2015. In comparison to China, the countries of Brazil, Chile, Peru, Mexico, and Ecuador were leading in English comprehension. Fast forward to 2017, and the literacy rate in Latin America is above 90% in most countries, clearing the path for more excellence in multi-language skills.

As Latin America becomes more proficient in English, residents of the United States are also learning more Spanish and Portuguese. In 2015, 11.6 million U.S. residents were bilingual, speaking both English and Spanish fluently. Today, 48 million people in the U.S. speak Spanish as their native language.

When you connect outsourced teams in Latin America with your in-house staff in the United States, this will create an atmosphere of comfort and open communication when speaking on the phone, via chat, or in emails. The high-level outsourcing companies will offer to work with your team in whichever language you prefer.

Founded in 2009, BairesDev is the leading nearshore technology solutions company, with 4,000+ professionals in more than 50 countries, representing the top 1% of tech talent. The company's goal is to create lasting value throughout the entire digital transformation journey.

What Is Blockchain as a Service, and How Can We Use It?

What Is Microsoft Viva Sales and How Can It Help Your Business?

BairesDev Featured in TechCrunch: “We Wanted to Provide Opportunities for Talented People”

What Is the Future of Pay Transparency?