Insights from the Experts on Software Outsourcing
Innovation

While the urgent need to reduce carbon emissions is certainly a factor in why renewables are booming, another huge contributing factor is simple economics.

Starting in early 2020, when the COVID-19 pandemic started, many industries took a hit. Hospitality is a primary example, as people stopped traveling and eating out. Nearly 2 years later, many restaurants have closed their doors for good, while others are still floundering. Other industries held steady and at least 1 — the energy sector — grew. In particular, renewable energy expanded, with a 45% jump in 2020 from the previous year, according to the International Energy Agency (IEA).

That growth is likely to continue in 2022 and beyond, due to momentum in governmental and corporate goals across the globe, as well as the decreasing cost of generating sustainable energy. In particular, solar and wind power are being supported by new battery storage technologies, while other solutions like hydroelectric power, nuclear fusion, and biofuel are not far behind.

As a business leader, you should be aware of these developments for 2 primary reasons: to consider how your company might be able to transition to renewable power and to determine what renewable-related products or services you can offer your customers. In the following sections, we take a closer look at the reasons for the renewable energy growth, the specific solutions being adopted, and how they’re being deployed.

What’s Behind the Growth

While the urgent need to reduce carbon emissions is certainly a factor in why renewables are booming, another huge contributing factor is simple economics. A recent World Resources Institute (WRI) article notes “Falling costs have been the biggest factor in the explosion of renewable energy. Since 2010, the cost of solar photovoltaic electricity has fallen 85%, and the costs of both onshore and offshore wind electricity have been cut by about half.” The WRI diagram below shows the key milestones in the growth of solar and wind energy so far.

The article goes on to state that these renewable sources are now cost-competitive with fossil fuel electricity. If the cost is the same or better and decreasing more all the time, and renewables make sense for the environment, common sense explains the rise in their use. Additionally, as government investments and infrastructure for renewables (such as charging stations) start to replace the one for fossil fuels (such as gas stations), it will only get harder for consumers and corporations alike to maintain fossil-fuel based operations. 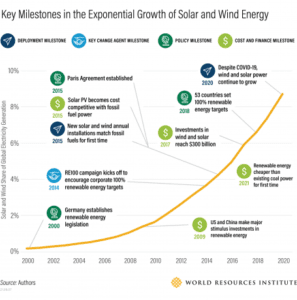 The source leading the way for renewables is solar power. According to the IEA, it is now cheaper than new coal or gas-fired power plants, and offers some of the lowest-cost electricity in history. Solar energy has the potential to power homes and even enable homeowners to sell the solar energy they generate to their utilities. It can be used in the same way for businesses, which are often located in buildings that drain a tremendous amount of electricity from the grid.

Solar energy can even power cars. Granted, the use case for solar powered vehicles is limited to drivers who live in sunny areas and don’t need to drive long distances each day. However, in that scenario, they provide a solution to the issue of needing to find a place to plug in, very useful for city dwellers who must park their car on the street. Solar energy can also be used to power charging stations, so those electric vehicles that do get plugged in get a similar advantage of lightening the load on the electric power grid.

In another astounding growth spurt, wind power capacity doubled over the last year, according to Canada’s National Observer. While that number accounts for all locations, the U.S. specifically is stepping up its wind power generation capacity, such as with a large offshore wind project, for which funding was approved in mid-2021. According to NPR, the 800-MW project will produce enough electricity to power 400,000 homes and businesses.

The use of other sources of renewable energy helping to power homes and businesses is also on the rise.

Hydropower. Hydropower is critical as a “booster” because it can easily be ramped up or down depending on the current state of intermittent solar or wind power generation. In recent years, hydropower has supplied a significant amount of global electricity generation.

Nuclear fusion. Like hydropower, fusion can help balance out the challenges with intermittency associated with other energy sources. While not widely used today, this energy source will likely have a key role in the future of renewables.

Biofuels. Biofuels, such as bioethanol and biodiesel, are fuels produced from renewable organic material. These fuels have a place in renewables, but it is limited based on the need to balance it with the energy and land used to produce the crops that go into it.

According to a recent New York Times (NYT) article, 1 of the reasons renewable energy is becoming more affordable is that, unlike fossil fuels, it becomes easier to generate over time. The article states, “Because solar panels, wind turbines, batteries, and related technologies… keep getting cheaper, we keep using more of them; as we use more of them, manufacturing scale increases, cutting prices further still.”

As this cycle continues, the industry gains momentum that sometimes outpaces experts’ ability to predict how much it will grow. While 15 or 20 years ago researchers believed renewable energy sources would only ever generate around 1% of the earth’s power, BloombergNEF now estimates that by 2050, 56% of the world’s electricity will be produced by wind and solar power.

This boom, which is already in progress, is expected to change the world’s economy as profoundly as the Industrial Revolution, according to the NYT article. This transformation will be a result of massive job creation and energy cost savings. Certainly, investments coming from the recent Infrastructure Investment and Jobs Act (IIJA) will contribute to this growth in the U.S., while similar efforts in other countries, especially those in Europe and Asia, are helping to accelerate the renewables boom as well.

AI Forecasting for Businesses: How Does It Work?

Modern Algorithms That Will Revolutionize Your Business

Tech Insights and Trends for 2023

DevOps Trends to Watch for in 2023